A Guide To Arc’Teryx Shells 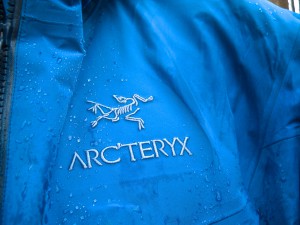 I bought an Arc’Teryx hardshell jacket last year after hours of research and months of consideration. I’ll get into the specifics of why I made that choice (and my thoughts on Arc’Teryx in general) in other articles/reviews, but for now I’m going to talk about an issue I ran into while trying to figure out what I wanted: shopping for Arc’Teryx apparel is confusing.

After a lot of digging through the footer links and submenus, I finally found a page that (sort of) defines these terms:

For example, here’s Arc’Teryx’s definition of the Beta series:

And the Theta series:

Great… so the only differences are the pockets (hand vs. chest) and the length? Not so fast… when you go back and look at the pictures, the pockets appear to be identical¹. They’re off-center like hand pockets but chest-high like chest pockets. When you look at the Alpha series, the description says chest pockets as well but they’re centered (the pocket zippers are just to either side of the jacket zipper). And the letters: SV (Severe), AR (All Around), LT (Lightweight), FL (Fast and Light), SL (Superlight)… First of all, what’s the difference between Fast and Light and Superlight? And how does SL on an Alpha jacket compare to SL on a Beta jacket?

My advice: Ignore it. Ignore the letters and the names. Ignore all of it. When comparing Arc’Teryx shells, all of the name/letter pairings boil down to different combinations of 7 things:

I think this variable has the most impact on the price of their jackets. At the time of writing, the Alpha FL is the least expensive GoreTex Pro jacket in Arc’Teryx’s lineup at $400. Most Pro jackets start at $500. Also look out for the terms “Paclite” and “3L Tricot”. These are referring to the type of backer, or liner, not the membrane itself. The backer is the material you see on the inside of the jacket. Paclite is considered a 2.5 layer vs. a 3 layer jacket, which I’ll discuss more in a separate article. Note that, currently, you’ll only see these terms when they’re referring to the Standard or Active membranes. GoreTex Pro uses a different backer called Micro Grid, which is a 3 layer construction. I believe one of the differences between the 3L Tricot vs. Micro Grid is that the former is a knit fabric while the latter is woven, but I’m not 100% sure on that. Also, there seems to be a big difference between the old “Pro Shell” membrane vs. the newer version, which is just called “Pro”. Arc’Teryx jackets released since the fall of 2013 have the latter. ProLite Gear has a good video showing the difference here.

Type of face fabric (N40r, N80p etc.)
The face fabric is the material on the outside of the jacket, and it requires a little bit of explanation in order to demystify what these numbers mean. The following formula can be applied: (Material) (weight/denier) (weave). So a jacket that has a combination of N40r and N40p means that it’s all nylon (N), it’s all 40 denier fabric (40), and the weave is a combination of ripstop (r) and plain (p). Some jackets (like the Beta AR) have a combination of N40 and N80, where the 80-denier fabric is added to high-wear areas like the shoulders and arms.

Pit Zips
Has them
Doesn’t have them

Fit
Trim/Athletic/Expedition – This mostly has to do with the amount of room to layer beneath it.

Length
For the most part this is the Theta line vs. the rest, since that series is the only one that’s cut significantly longer than the others. There is a difference in length between the Alpha and Beta, but it’s small, probably about an inch. I think the Alpha series has a slightly more dramatic taper from front to back as well.

So, is that it? When we’re talking about the standard hardshells in the the Alpha, Beta, Theta, and Zeta series, and not winter-specific shells like insulated and ski-featured jackets, yes. There are some minor differences between them, like whether the hood adjustments are on the inside or outside of the jacket, and the Alpha series has a small foam insert in the hem to keep the jacket from sliding up under a harness, but for the most part, that’s it. Happy shopping.

¹ I’m sure this is just a typo on Arc’Teryx’s site and that the Theta series should be considered to have “hand pockets”, but given the amount of other information one needs to sift through to understand the differences between them, it certainly doesn’t help the situation.

← A List For Every Occasion
Thoughts On Water Bottles →

9 comments for “A Guide To Arc’Teryx Shells”