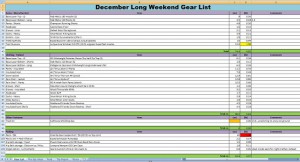 Weighing the entire contents of ones pack as a whole is nothing new; I recall doing it a few times when I was in the Boy Scouts. Back then, you weren’t trying for the lightest pack, you were trying for the heaviest. Carrying a 60+ lb. pack earned you bragging rights, not ridicule. I even recall taking turns carrying a dutch oven once so we could have peach cobbler for dessert… but really we just did it so we could say we did it.

I’m not in the Boy Scouts anymore and if you want to carry a 60 lb. pack for bragging rights, be my guest. While I don’t necessarily care about whether or not my pack fits UL criteria, there’s just simply no reason to carry a pack that heavy these days.

Weighing your pack as a whole is still a good place to start, but the two biggest favors you can do for yourself are 1) spending $30 on a digital food scale, and 2) firing up MS Excel (or a similar spreadsheet program). The first time I read about people actually weighing each piece of gear separately, I thought they were crazy (and I had no intention of ever being that crazy). But doing so has not only helped me lighten up my pack significantly, it made me dig through my closet and sort through piles of gear that I forgot I even had. Some things ended up being useful again and some went into the “I’ll probably never use it for the rest of my life” pile¹.

Putting together a spreadsheet will definitely surprise you if you’ve never thought about weight before. Take the following comparisons for example (columns are ounces and pounds): 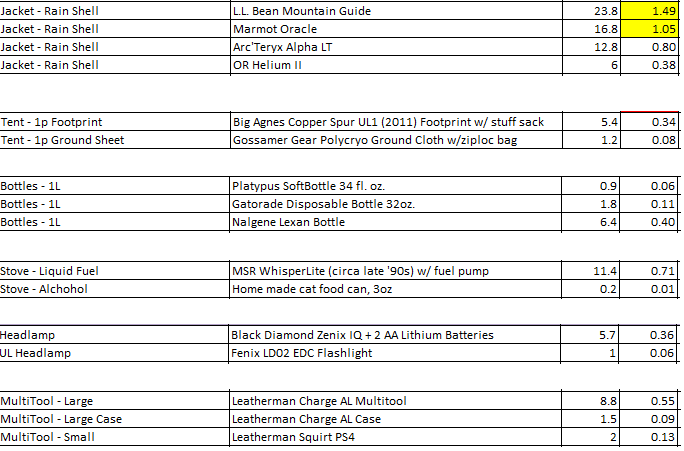 Packing the OR Helium II, PolyCro ground sheet, Platypus Softbottle, Cat Food Can Stove, Fenix flashlight, and Leatherman Squirt, instead of the LLBean Mountain Guide, Copper Spur Footprint, Nalgene Bottle, MSR Whisperlite, Black Diamond Zenix, and Leatherman Charge AL multitool w/case, will save you about 51.7 oz., or 3.2 lb. Note that the LL Bean jacket is a much older model that was purchased around 1999/2000.

These are miscellaneous examples of how much weight you can save by replacing some of your older gear with lighter versions (or never buying the heavier version in the first place). Everything on that list (with the exception of the Arc’Teryx shell) is fairly reasonably priced insofar as gear is concerned. And in this list alone, taking the lightest version vs. the heaviest version will save you about 51.7 oz., or 3.2 lb. That’s a significant amount considering we’re only talking about a rain jacket, groundsheet for a tent/shelter, a water bottle, a flashlight, and a pocket knife. 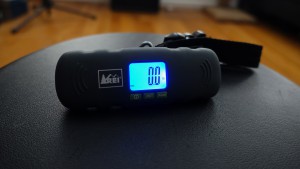 A hand scale can be useful in figuring out your total pack weight. It also lets you double-check that your spreadsheet calculations were accurate.

The other thing a gear list will help with is trip planning. Instead of digging through your closet before each trip to figure out what you need, you can sit down a few days ahead of time and go through your list to single out the items you’ll take. When it’s time to actually pull things out of the closet, you’ll already have a list to help you pack.

The planning aspect isn’t just before a trip, either. After you’ve gone on the trip, make notes about what worked and what didn’t. As you refine your system, you’ll even have out-of-the-box gear lists for future trips (depending on environmental conditions). 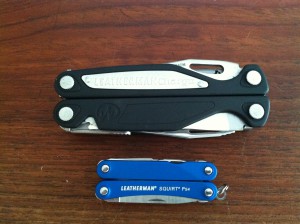 A spreadsheet is helpful with planning food as well. It can not only help you figure out the weight of your average food items, but help you obtain the highest calorie-to-weight ratio too… which means carrying less food and likely less weight (at the very least, less bulk).

I’ve attached two Excel documents as examples of 1) a master gear list, and 2) one edited for a specific trip. I’m aware that the latter contains items that a UL hiker would probably scoff at, but a 14-15 lb. base weight (the weight of the pack without items worn, and before food, water, and fuel, are added) is perfectly acceptable for most trips. I typically have a base weight of about 16 – 18 lb. when cooler weather (adding a down jacket, insulated pants, heavier rain shell, etc.) and longer trips (adding items like a battery charger for my SteriPen, Phone, and Camera… a SPOT messenger… and optional but not superfluous items like a small camera tripod) are taken into consideration.

My spreadsheet will auto-calculate the pounds column as well as the totals. It also has color coding rules to highlight anything over a pound (but under 2 pounds) in yellow, and anything over 2 pounds in red. If you’re entering lots of things into the list, this will give you immediate insight into where your heaviest items are. To use the spreadsheet for planning a trip, simply hide the rows of items you’re not going to take and it will remove those weights from the totals. This means that you don’t have to delete the row in order for the weight to calculate, so if you make a mistake you can just unhide the row instead of having to add it back manually². I typically save a copy of the list and label it with the trip date, so my original master list isn’t modified and I can go back later and look at separate trip lists. There are also additional tabs for making pre-trip and post-trip notes as well as for planning food and identifying a route.

Using a spreadsheet to plan food can help you remember portion sizes, weight, and caloric information.

Looking at an ultralight hiker’s gear list can intimidate casual backpackers when items like cuben tarps (or even tarps in general) and 3/4-length foam sleeping pads (supplemented with an empty backpack) are included, and everything but bare-bones clothing options are excluded. But it shouldn’t stop you from finding your way to a lighter load, because it’s still entirely possible to do so without being extreme.

¹ Depending on your social circles, it may still make sense to hold on to older (but perfectly usable) gear. I’ve helped outfit trips for multiple people with gear I probably won’t use again (tents, sleeping pads, rain jackets, etc). Often these types of trips aren’t for people who ever plan on doing it with any regularity, or they’re just trying to see what it’s all about. I’d also recommend tailoring the hike accordingly.

² Note that the ability to have the weight recalculate when hiding rows vs deleting them requires an additional formula. Keep this in mind if you create your own list.

← Developing a System
A Guide To Arc’Teryx Shells →