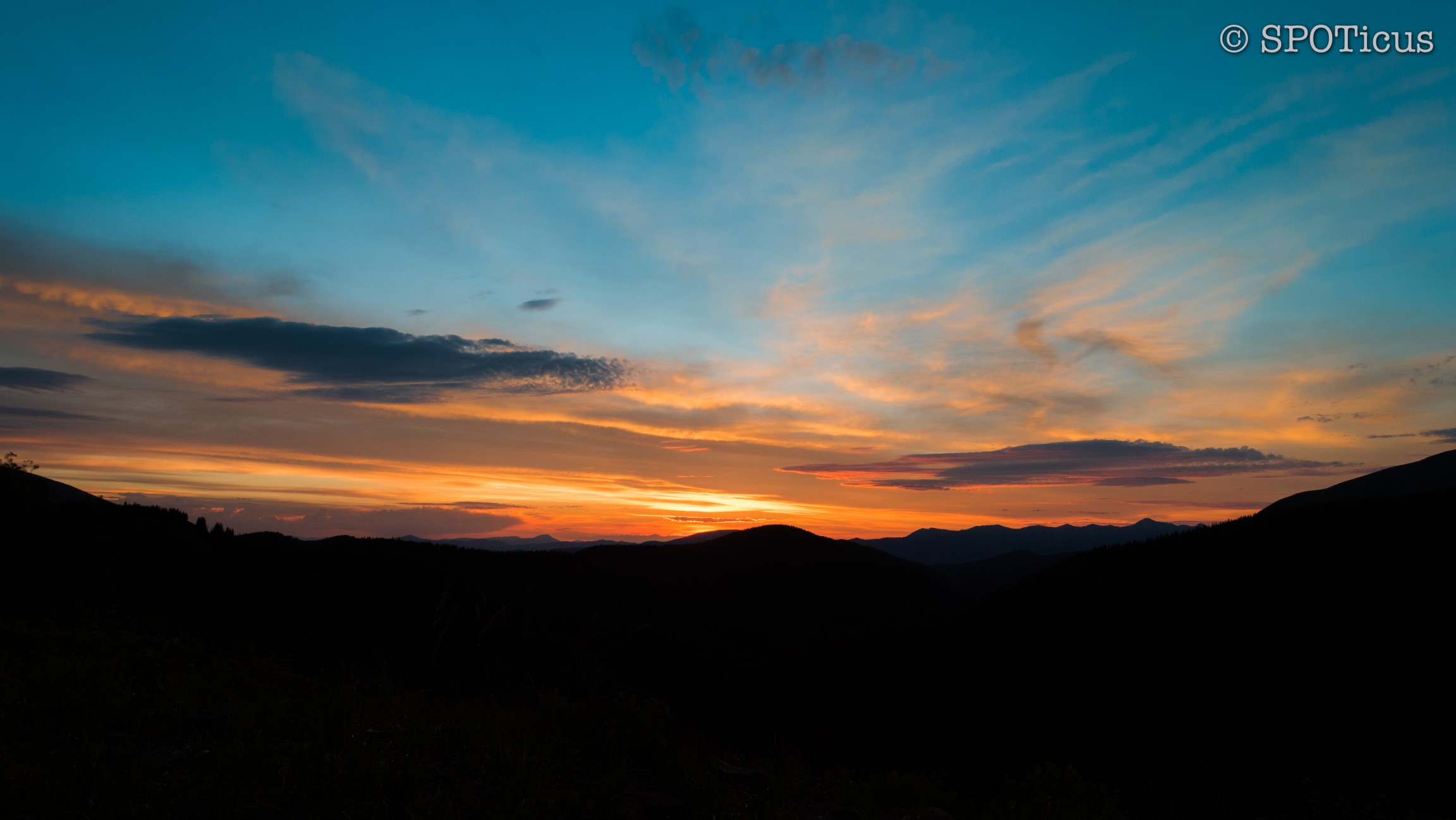 Photography 101: Advice From a Non-Photographer Part 1

Hiking often provides the unique opportunity to capture sights that few people will ever see. The problem is that seeing something + having a camera ≠ a good picture. You might get accolades from people who don’t have a concept of what the original scene looked like, but as a person who’s frequently seen both the actual landscape and the final picture, I’ve often been disappointed with the results. Since I’m not a photographer nor have I ever taken a class on the subject, closing this gap has mostly been a trial-and-error process. I’ve distilled this process down into 5 general rules that fall into beginner, intermediate, and advanced categories. You don’t have to practice all 5 in order to start taking good pictures; even if you just follow the first 2 you’ll be in pretty good shape.

1) Clarity. It seems like this should go without saying but if you want to take a picture that people will look at and say, “wow”, you have to start with a clear image. None of the other rules matter if you don’t have a clear image because there’s little that can be done to fix it later. You can brighten pictures that are too dark, you can darken pictures that are too bright, you can adjust contrast and saturation fairly easily, but you can’t make a picture “unblurry”. This rule is #1 because it’s the foundation for everything that follows.

So, how do you guarantee a clear picture? The reality is that without really fancy equipment and a wealth of knowledge, I don’t believe you can ever “guarantee” it. But there are certainly steps you can take to improve your odds. The first is to know your camera. This doesn’t mean (at this point, anyway) that you need to understand every last feature on your camera or be an expert on fine tuning all the adjustments. It simply means to have an awareness of how your camera operates in different conditions, even if you always shoot in automatic mode. Most people know that basic point-and-shoot cameras don’t work well in the dark, but the results can be incredibly variable in borderline situations like dusk and dawn… even an overcast day can be a challenge for some cameras. Knowing when you can just whip out your camera to snap a quick picture vs. when you might need to take a little more time can make a huge difference in your results. Try to be aware of what you’re doing when you take a picture so you can figure out later why a certain image may have been blurry. Was it a limitation of your camera or were you simply moving to fast? Another thing to keep in mind is that this rule doesn’t just matter when taking pictures, it applies when you’re sorting through them as well. Resist the urge to include pictures in slideshows and scrapbooks that are “almost” awesome or “would be great if they were a little less blurry”. When you see a stunning picture from a professional photographer, keep in mind that it was probably chosen carefully out of hundreds of pictures that were taken at the same time or of the same subject. Know when to cut your losses with a picture you really hoped would turn out but didn’t. 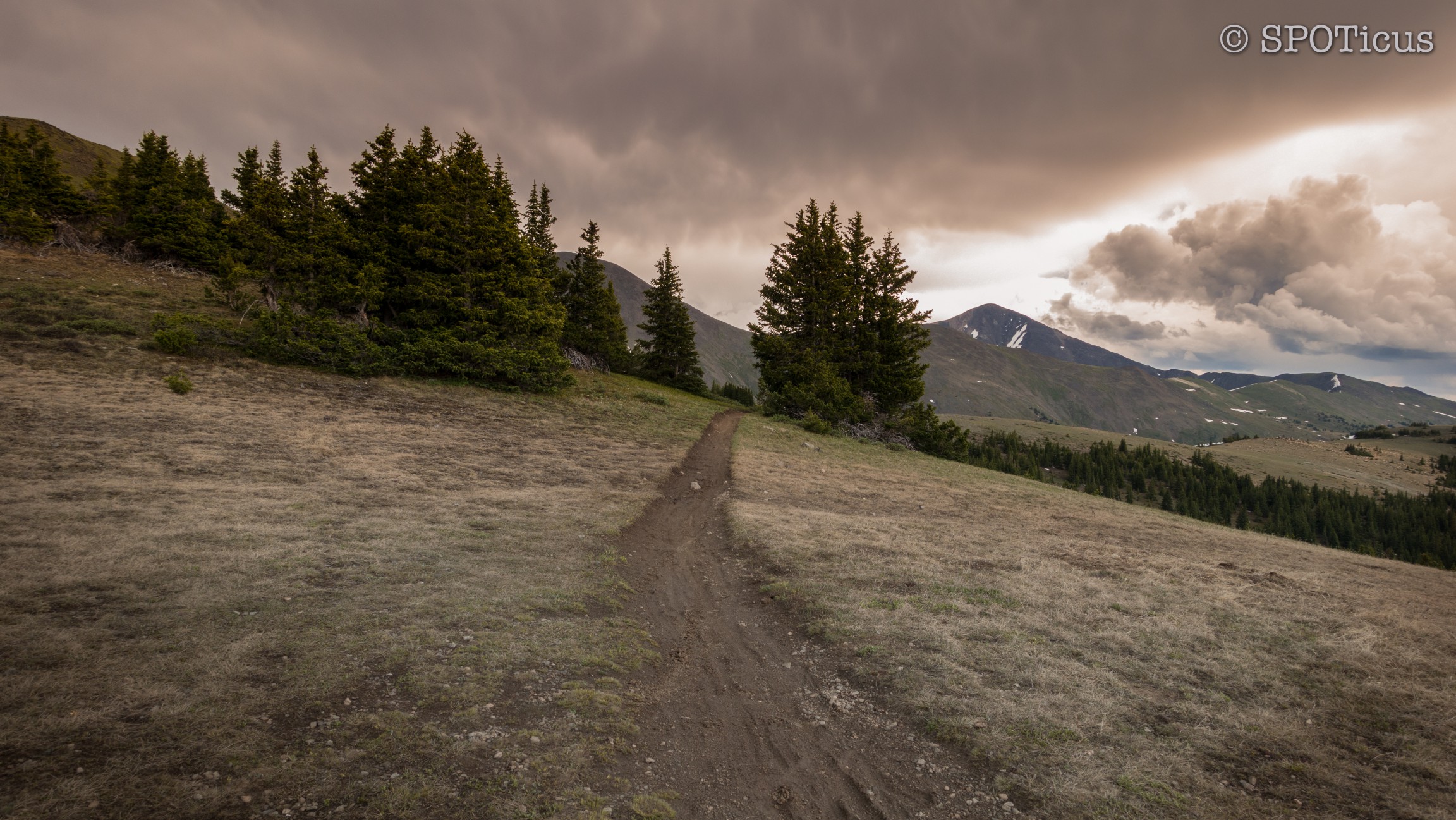 In the grand scheme of photos I took while on the Colorado Trail, this one barely registers. But taking a minute to get a clear image instead of shooting while walking gave me something to work with later.

Besides being familiar with your camera, patience is just as important for taking clear pictures. When you come across a scene “you have to capture”, ask yourself if it’s really worth having the picture if it’s just going to be blurry anyway. Often, the answer is no… which means you’re better off taking your time and possibly missing the shot than hurrying and definitely getting a blurry version of it. This thought process is something that takes practice and discipline.

2) Proper Framing. And I’m not talking about what you would buy to hang your clear picture on the wall. Taking a good picture isn’t just about what’s in the scene, it’s also about how that scene appears within the confines of your picture. The difference between an average picture and a striking one can be a matter of inches (to the left, right, up, or down). Getting this right results in the kind of picture people look at and say, “that person has a good eye”.

The first step to framing a good picture in the outdoors is to understand that it’s unlikely that you’ll be able to accurately capture on film what you see in front of you. This is especially true with larger landscapes where the greatest impact comes from the first-person view of being able to see everything at once. It’s a natural desire to want to capture that feeling of “everything at once” in your picture, but in order to do that you need to learn how to separate what you see from what you’re able to frame in a single shot. This is what I call reacting to vs. composing a scene. The former happens when you see a landscape and assume that all you need to do is take the picture; the latter involves thinking about how you can use a slice of that landscape to the greatest effect. Capturing an expansive feeling on film often means taking a different picture than the first thing you react to when you’re there. For example, a wide open view from the top of a mountain might be visually striking in person but a large part of that feeling has to do with the depth of the view. You may not fully capture that depth if you only take a picture of distant objects. This is why a picture OF a mountain, rather than the view from the top of one, often results in a better photo… because the large thing in the distance offers a contrast to the foreground and creates a greater sense of depth. A picture of a flat space that “goes on forever”, when taken from the top of a mountain, may not always yield great results if there’s nothing to accentuate the depth of the view. 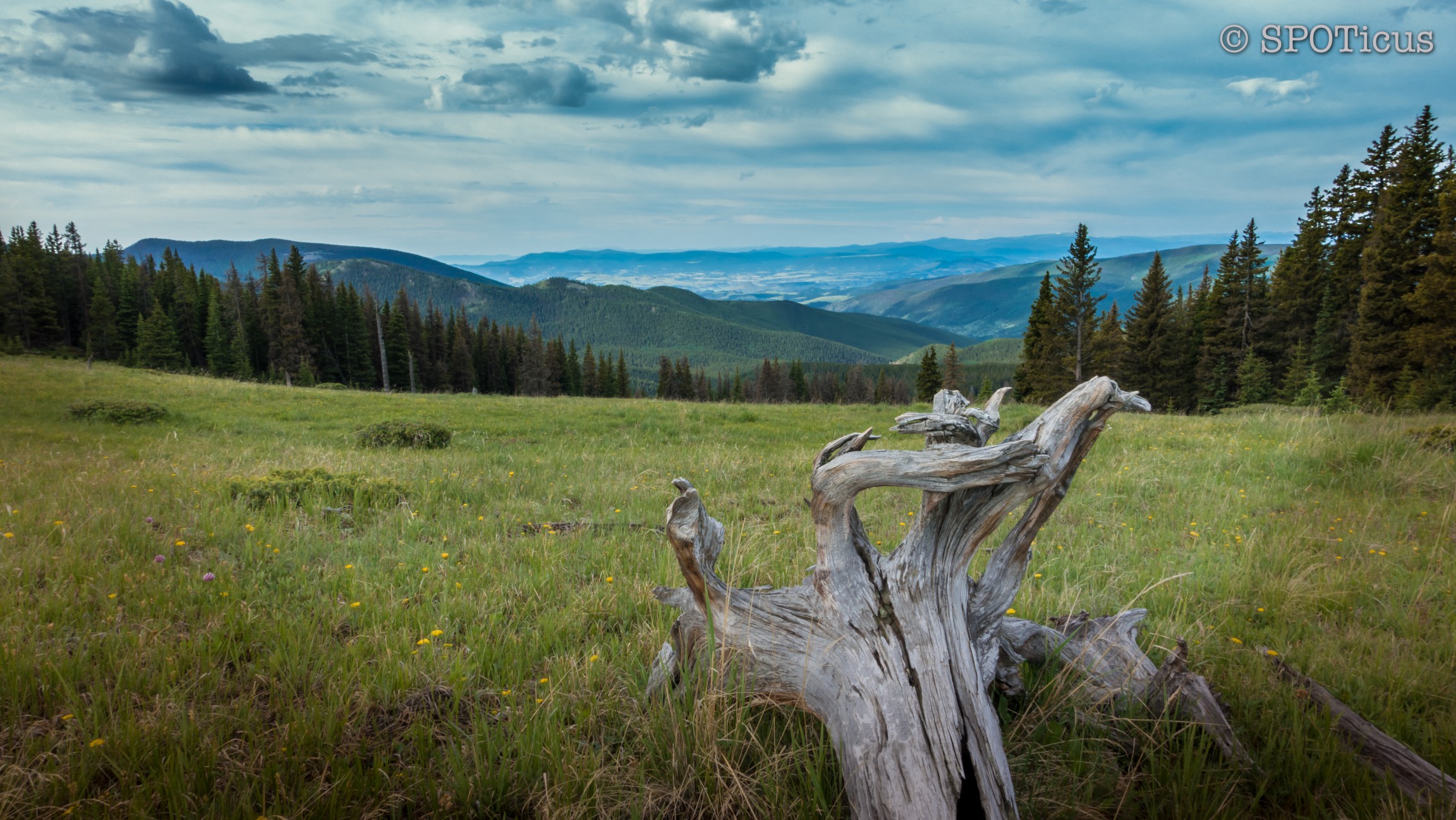 This isn’t the most remarkable picture in the world but it’s a good example of using the landscape to create a sense of depth. It’s subtle, but there are multiple tiers to this picture starting with the tree stump.

The next step to composing a good picture has to do with where you orient objects within the picture. You might take a picture of the most beautiful flower in the world, but if it’s taken at a downward angle and the flower is in the bottom corner with nothing but dirt in the rest of the view, it’s a good bet that the resulting photo will not be very impressive. There are a couple of things to consider when orienting objects within a picture: the location of the main object (if there is a main object, like a flower) so that it takes the primary focus of the shot, and anything around the object that may enhance or detract from the picture. In the example of the flower, centering it and shooting directly down may be ideal if the surrounding area includes foreign objects like signs, fences, etc. On the other hand, if the flower is in a meadow with other interesting things around it, consider shooting from the ground in order to capture what’s in the background as well. If you see something that looks picture-worthy don’t just take the shot from where you’re standing; walk around the object (if possible) to get a feel for how each angle might translate into a different photo.

Another big decision is whether to center an object or shoot it off center. Centering an object is usually safer; otherwise you run the risk of creating an awkward photo. Conversely, if you shoot everything dead center, it can become boring and lead to a feeling of redundancy. Learning how to shoot something off center in a way that keeps the scene balanced takes practice, but it’s a valuable skill to learn.

Speaking of practice, that’s obviously the surest path to taking better pictures. Practice doesn’t always require being in the field with your camera, though. Something that helped me immensely was not only looking at my own pictures but looking at other peoples’ pictures and asking myself what I liked and didn’t like about them. This is especially important when you see an amazing photo: try to describe exactly what makes it so special and keep those things in mind when taking your own pictures. There’s nothing wrong with looking at a picture and thinking about what could make it better, too.

3) Tell a story / create a narrative. This is the last “beginner” rule because, like the previous 2, it can be done without any special equipment. It’s more about having a thoughtful approach than a fancy camera. The idea behind #3 is that sometimes there are boring things in between the interesting sights. If you only take pictures of the interesting sights it can feel disjointed later when creating a slideshow or explaining the trip. Sure, you’ll have some amazing pictures from the top of a mountain but if you don’t have anything to put that into context, the slideshow will feel incomplete. Stop and take pictures of the trail every once in a while, even if it’s just trees. 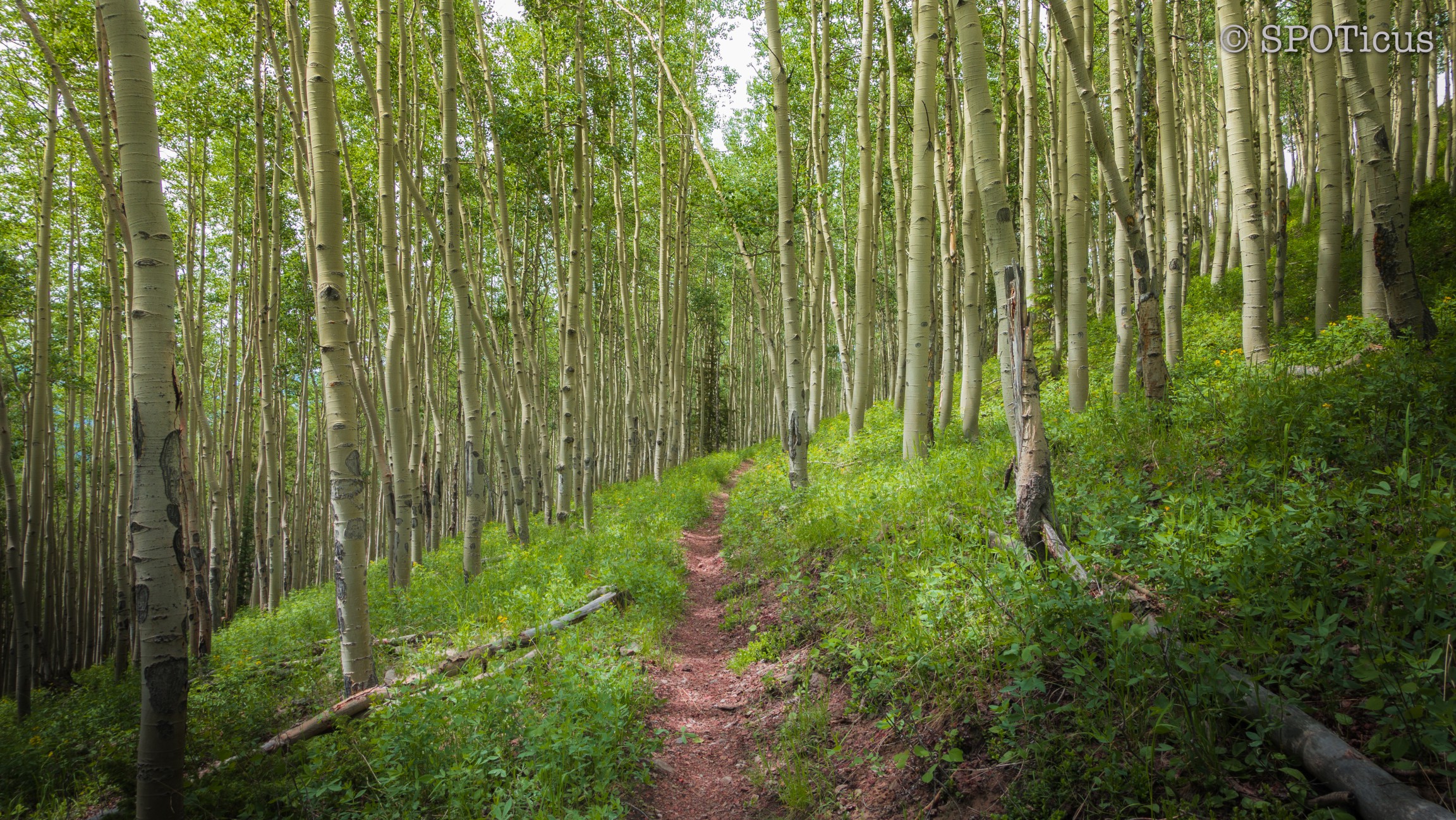 Take pictures of your campsites even if you already have shots of your tent. They may not be the greatest pictures in the world but it’ll be the difference between having a few random pictures of mountains and a having a series of pictures that create a sense of progression. And who knows, if you follow rules 1 & 2 when taking pictures for #3, you might wind up with an amazing photo that you wouldn’t have taken otherwise.

← How To Stuff Your Stuff
Photography 101: Advice From a Non-Photographer Part 2 →